The Cryptogasm needs a dose of perspective 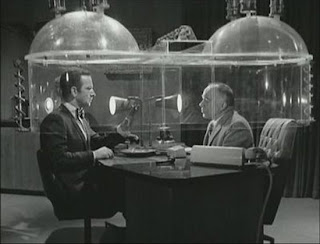 Ed Snowden's PRISM revelations and the drip-drip-drip follow-ups by reporters Poitras and Greenwald have people in a windmilling panic.  According to countless op-ed pages and blogs, we can't trust our devices and services for fear the NSA might be accessing them. Going off the grid is suddenly fashionable.  Folks sense the NSA's shadow behind every pillar, its ears pressed to every wall.  Apple introduces a new smartphone with a fingerprint authentication sensor, and instantly the Internet teems with anxiety that somehow the spooks might be able to access it.  (As if one's fingerprints aren't on everything ever touched, starting with their birth certificate!)

Fortunately we have Citeworld to assure us, "[Apple's new fingerprint sensor] detect[s] the ridge and valley pattern of your fingerprint not from the layer of dead skin on the outside of your finger (which a fake finger can easily replicate), but from the living layer of skin under the surface of your finger, using an RF signal. That only works on a live finger; not one that's been severed from your body."

Such good news: you can sleep without fear of cloak-and-cleaver types amputating your digits in the middle of the night to unlock your iPhone.  People actually worry about that sort of thing today...

Strike one misdirected, overblown fear, then.  There are plenty more where that came from.

Because it's not at all clear that the pundits and commentators have the least clue about the true spectrum of threats to us our liberty today.  The NSA's curiosity may well rank among the least of them.

Case in point: within the US it appears you have no Fifth Amendment right to decline to unlock the new iPhone 5S or any other device or lock based on a biometric "passcode," because courts have ruled that fingerprints and other physical attributes of a person do not equate to compelled testimony [cf., http://www.wired.com/opinion/2013/09/the-unexpected-result-of-fingerprint-authentication-that-you-cant-take-the-fifth/].  I'm not an attorney, but the Fourth Amendment might not apply either, if previous case law holds for encrypted digital stores [see, for example, http://www.theindianalawyer.com/court-affirms-locked-glove-box-search/PARAMS/article/25155 and http://en.wikipedia.org/wiki/Carroll_v._United_States]

So, your choice of authentication mechanism has a far more profound and immediate impact on your Constitutional rights than any encryption-cracking initiative that might exist in the bowels of some three-letter agency.  Yet count the headlines.  It's a fair bet this is the first you've heard of this potentially cataclysmic rupture of your rights*.

See, many true threats are not technological.  And straightforward tools continue to be effective against them in the post-Snowden era.

My point isn't to diminish Snowden's stunning revelations, or the dismay over the surveillance of reporter James Rosen or the AP's phone records, or any of the other Orwellian headlines attesting to a surveillance state that's burst its bounds.  It's just that there are threats, and then there are threats.  NSA is just one, and it's far down the list for most of us.  Certain other countries pose another real and present threat to your digital information and identity; creepy Internet services are another; your business competitors are another; personal rivals and enemies are yet another; if one's spouse turns on them then that'd be yet another...

That last one isn't hyperbole, incidentally.  The first indication a friend of mine had that his wife was turning on him and plotting a harrowing divorce was when he noticed things had been slightly changed on his PC.  Turned out she'd hired a private eye to snoop on him, and the guy had installed keyloggers and other spying software.  Nice.

My point: even a weak password would deter that and many other threats you could plausibly face.  Maybe not the NSA, but c'mon, let's be real, if a drug cured 80% of the diseases it was used on, it would be a miracle drug.  And even weak passwords will stymie 80% of the threats to your digital assets and mine.  Maybe more.  That's not to encourage a sense of false confidence, but it's a very true statement.

Frankly, I first got paranoid about having my computer encrypted when I left my company's office for lunch one day, realized I'd forgotten something, did a U-turn, and walked back into my office to find another employee poking around on my computer.  The guy had always struck me as creepy, and you can bet I password-protected my disk that very day.  With that guy, it wasn't so much what he might have found on my machine as what he might have put on it!  And, again, even the simplest password would have thwarted whatever his intentions were.

Some correspondents have fretted to me about Google acquiring a quantum computer [http://www.wired.com/wiredenterprise/2013/06/d-wave-quantum-computer-usc/], feeling it's part of a plot to undermine all encryption.  Well, for one thing it's still unclear if that computer is actually truly quantum or applicable to cypher-breaking.  The thing isn't exactly open-source, and its capabilities remain mysterious even to its makers and might well be leavened by hype.  And Google is stuffed with curious geeks and flush with money, and they fill the place with toys.  This is just one of many such.  Personally, I don't think their intent for this machine is nefarious, and there's simply no way such computers could factor in any meaningful way into the troves of data Snowden's slides suggest are accessible to the NSA-- certainly not for the budgetary numbers Snowden also provided.  But, people worry about these machines, maybe because of their mysteries.

There is an inverse relationship between our ability to understand events and our tendency to fear them.

Unless there's a flaw in the encryption algorithm, which is a remote possibility, in which case you're surely screwed, but only by whoever possesses knowledge of the flaw and has an interest in little you.  It's much more likely that governments (plural) would just acquire the keys used to encrypt, either by theft or by collusion with the companies that hold the keys.  After all, if someone holds the keys, they don't need to crack anything and they don't need a quantum computer.  And, in fact, the certificate authorities who maintain the encryption keys used by websites and internet services have been repeatedly hacked over the past several years.

So, your encryption is, for all intents and purposes, merely as trustworthy as whoever holds the keys.  The technology is, again, the least of it.

With some tools like PGP, you hold your own keys.  (See the "What to do" section of http://unvexed.blogspot.com/2013/06/what-prism-may-be-and-means.html)  Use them with a strong algorithm like AES-128 and good long password, and you'll cause trouble even for the NSA, most likely.  And you'll thwart lesser enemies, no problem.  And those are numerous.

*Side note: The convenience and security of the iPhone 5S's new biometric sensor are very compelling.  If Fifth Amendment considerations are a concern, one could use a multi-layered approach: Go ahead and lock (and thereby automatically encrypt) your iPhone with its fingerprint sensor, but store sensitive items in their own encrypted form with a passcode type of authentication.  Of course, outside the US the Fourth and Fifth Amendments are moot to begin with.  And then there's at least partial weakening within 100 miles inside any US border or coastline [http://www.wired.com/threatlevel/2008/10/aclu-assails-10].  Best not to leave home with anything problematic in your possession, hm?