How to set up a real, encrypted VPN through your Raspberry Pi

Well isn't it always this way... the very day after I post on how to use the Raspberry Pi as a secure Internet proxy by working around a missing element in its variant of Linux, that missing element becomes available in the stock OS! 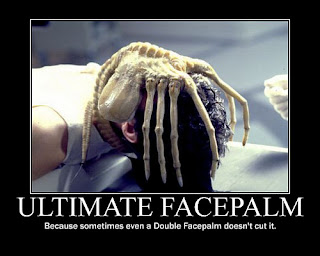 Here's how it went.  On a whim, even though I'd just given my Raspi a full software update just two days ago when I made that earlier post, I repeated the process again today:

...and lo, there were some important packages that updated.  Sniffing further, I attempted the first step of the installation process for installing a "real" PPTP VPN onto Debian Linux:

No error was reported!  The formerly-missing MPPE module has been added to the kernel.

Well now.  This poses the tantalizing possibility of setting up a real, Point To Point Protocol (PPTP) Virtual Private Network using the Raspberry Pi as a gateway.

A VPN strategy for every situation

Among the highly non-trivial benefits of the PPTP VPN versus the ssh proxy tunnel I documented previously include compatibility with iPhones, iPads and other mobile devices which might not offer ssh port forwarding capabilities in their operating systems.  That was the basic trick of the ssh proxy tunnel.

On the other hand, PPTP VPNs utilize the GRE 47 protocol which is some routers find indigestible while others can accommodate only one GRE 47 connection at a time and will block all others-- a recipe for trouble in hotels and public hotspots.  By comparison, the ssh proxy trick I documented--which leveraged the https or other common port for the ssh proxy tunnel--will be more likely to always work as you travel, at least for your laptops.  Frankly, at this point I have both the ssh proxy tunnel and the PPTP VPN set up on my Raspberry Pi, and I might as well leave it that way so I'm covered for just about any circumstances.


There are many tutorials available for setting up the PPTP server daemon (pptpd) on a generic Debian Linux machine.  However, I've found that the Raspberry Pi presents a few quirks and needs its own instructions.  The following steps worked for me and resulted in a robust VPN that has held up to my usage so far-- this blog post was constructed entirely while connected via my Raspberry Pi's new PPTP VPN. 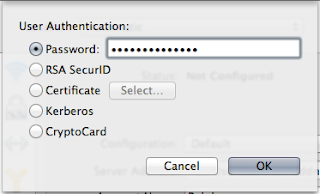 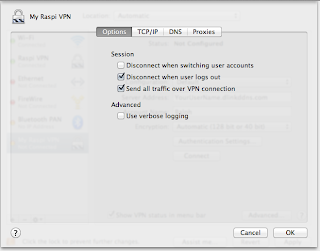 You're done!  (Setting it up on an iPhone or iPad is even easier.)

You should be able to connect now, and all your Internet traffic will be encrypted and funneled through your Raspberry Pi from wherever you are... or at least from wherever VPN connections are tolerated.  For other places, consider the ssh proxy tunnel I wrote about before.
Posted by Scott Jordan at 10:28 PM