I'm a huge fan of Dropbox and other cloud services.  It's just incredibly convenient to be able to access my stuff from all my machines.

But security and privacy remain problematic: If your stuff is stored on someone else's machine, who else can access it?  The question has been in the news lately.  Expect more such stories as adoption of cloud technologies accelerates.

Yet by far the largest risk to your data is loss from hardware failure, theft or physical disaster.  Aside from the convenience factor, storing things in your Dropbox means it's locally copied to all your machines as well as safely backed-up (and versioned!) in the cloud.  For those reasons, I keep all my current work in my Dropbox.  Securely!


Here's How:
I use Macs most often lately, and this tip leverages some truly keen capabilities of OS X.  (I am unaware if Windows 7 offers similar functionality combined with similar ease and baked-in speed, but there are third-party tools like TrueCrypt which can attempt something kinda/sorta parallel, but not as easy or automagical, and not as swift in execution.)

Disclaimer: a patient Bad Guy could probably hack any encryption, and it probably serves as a minor inconvenience at best to any of several three-letter agencies.  But, I suspect that should I be of sufficient interest to such folks that they'd be groping my digital giblets rather than just fondling my carbon-based ones at airports, encryption strategy would be the least of my worries. 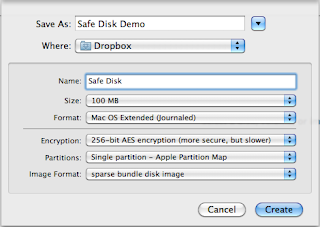 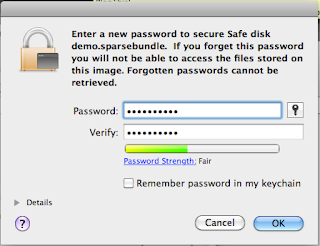 You can, of course, do the same thing without putting the sparsebundle in your Dropbox.  For example, I have a VMWare Fusion virtual machine with sensitive content installed on a 25GB encrypted sparsebundle on my external Firewire disk.  Thanks to OS X's deep integration of this functionality, it runs like a hose.